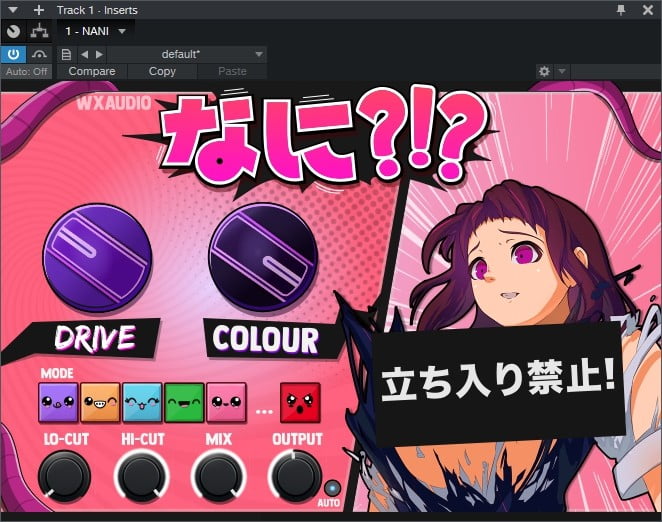 Release note :
A witch says,
A crack available in P2P requires internet connection which sends data to developer server.
Our ECCHI keygen generates valid license directly to the computer. No server connection, all works under offline computers!
A witch thinks,
This plugin violates the Steinberg’sVST3 license agreement. 3- (e) is clearly prohibiting Hentai plugin.
Anyway, we kawaii witches sincerely welcome the outlaw developers
It looks like he is having hard time with coding the protection. We will help him a bit! One of the issue is caused by JUCE lib. There are many developers using that JUCE function and having exact same issue. Check out the technical note below …

New in version :
Finally the new skins are here! First, we added Mr. Banana Man, a safe for work explosive banana. Mr. Banana man will provide an option for when you’re in spaces where you can’t have hentai on the screen. And for those that embrace the hentai, we’ve also added a brand new NSFW e-girl waifu, Naomi.
We’re happy to roll out more free characters for the betterment of NANI. With that said, we’re still a small company and it takes a lot of time and money to make new skins. If you’d like to support WXAudio in all of our future endeavors, we definitely won’t say no to donations (wink wink).
Added an option to upscale the animation framerate to 24 fps (currently 12fps)
We used AI to upscale our animation frames which was pretty cool. This option will add a lot of fluidity to the characters. Increases the CPU minimally
Currently the BPM mode does not support the 24fps, but this will get fixed in the future.
Added an option to scale the plugin for higher resolution displays
Currently there’s only three options, but if people need bigger or smaller sizes, we could add more.
At higher scales the CPU processing can increase slightly.
Added the option to hide NSFW characters.
Added the option to set a default character on launch.

BUG FIXES
Hopefully fixed a bug where some DAW’s were making NANI resizable resulting in the GUI getting messed up.
There’s a chance with some of the changes to the way the new skins are loaded, there could be display problems on older versions of operating systems. If you do have any problems with this definitely let us know!
Presets – Just haven’t gotten around to it, but soon enough!
More new skins
Adding a lower CPU mode.
Optimizing certain distortion algorithms