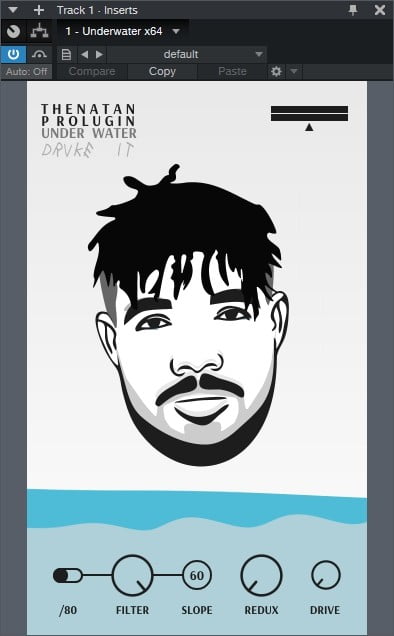 Description: Plugin Thenatan Underwater will make the tracks sound just like Drake’s. Drowning Drake treatment chain to give the signal a hazy “underwater” effect.
The developer with the nickname Thenatan released a plug-in that makes the signal sound like Drake. Thenatan Underwater uses a series of effects and treatments to mimic the signature Drake sound created by producer Noah Chebiba, aka “40”.
The multi-effect changes the sound of the input signal and the entire project so that the sound takes on a pronounced muddy and “underwater” sound. To understand: you can evaluate the sound created by Noah “40” Shebib on any track by Drake – the producer worked on all the albums of the Canadian musician.
The plug-in uses several sequential processing to simulate the sound. A low-pass filter is applied to the signal, which cuts everything down to 80 Hz, a general softening filter, a degrading bitcrusher signal and a saturator with a special algorithm. A separate master knob is provided to control the final signal volume.
Changes to settings are visualized in the plugin interface through Drake’s changing face and hair style. Depending on the settings and the intensity of the effect, the hair and eyes of the drawn hero change color.
The developer notes that the plugin is useful not only for imitating Drake’s sound, but also for creative processing of any music. The instrument will be a great addition to the collection of plug-ins for signal distortion and aging, as well as giving it a characteristic lo-fi sound.