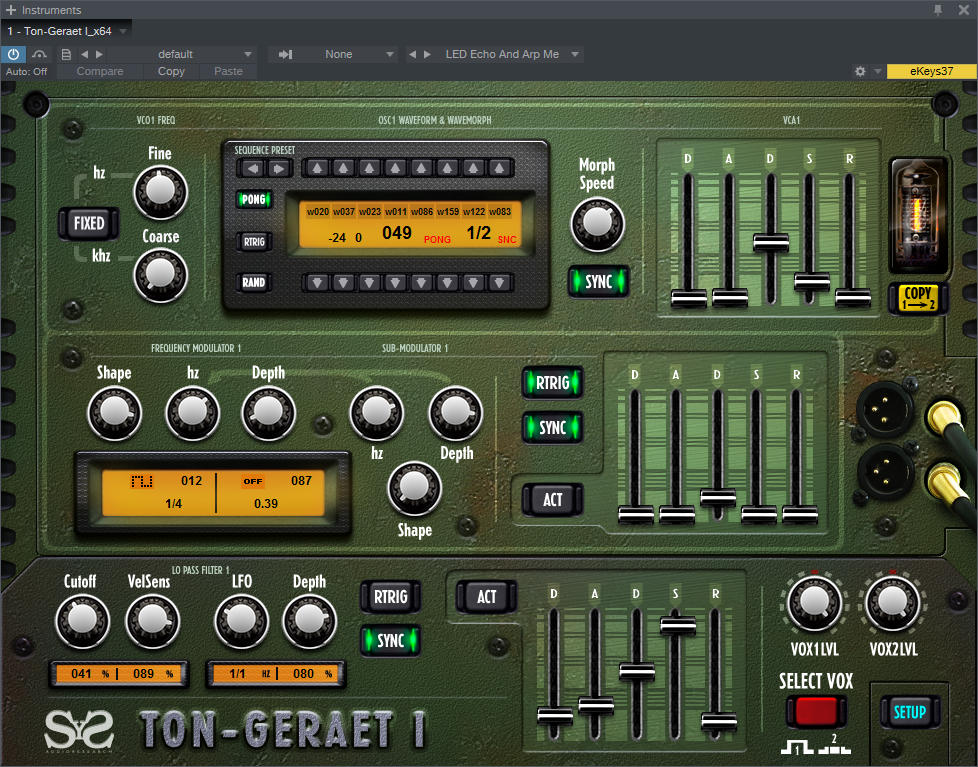 SyS TG1 is a multitimbral synthesizer with 2 individual voices and a waveform sequencer.

The waiting is over – 6 years later we created a fully satisfying final version of this long awaited device.

When we announced SyS TG1 in 2010 and sent out some Beta versions, we were so surprised by the massive amount of interest and the pure impact of downloaded demos, we almost had to shut the website down, because we weren’t prepared for that kind of attention.
SyS TG1 must have hit a nerve, and here is why:
Coming from the C64 and 8-bit sound world, Wertstahl always wanted to have a Synthesizer, that acted like a SID Soundchip but in a 16-bit context. So he just took ideas from how the programmers on the C64 were generating certain effects to enrichen the sound of the very limited chip, like seqentially switching waveforms or using arpeggio-lists to create pseudo-chords. And like that, the heart of the SyS TG1 was born: the wave-morph-sequencer. Not only can you sequentially switch from one waveform to another while your sound is played, but the waves will smoothly morph. This generates a multitude of transitions of over- and subtones, giving the SyS TG1 it’s unique sound.

Aditionally, manipulation of sounds should be as simple and intuitive as possible, so we added a double LFO-Unit and an Akai S-1000 inspired 12-bit low-pass Filter. We didn’t get it to make this very distinctive erranous high squeak sound when at 99% cutoff, but it is very non-resonant and softening. Just like we wanted it.

Also, deep inside the device, you will find some mixing-routine switch, and the Kraftwerk-Inspired “Stoerstrahlung”-button.