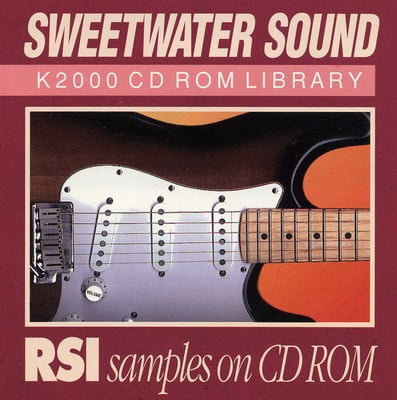 These RSI Samples on CD-ROM are a completely new sample library developed specifically for the Kurzweil K2000/K2500. Unlike other sampler libraries that are merely “ported over” to Kurzweil format, RSI on CD-ROM was truly designed to take exclusive advantage of VAST technology. No matter whether you’re doing Pop, Jazz, Orchestral, or SFX/Film Score, you’ll appreciate the musicality and powerful expression available with such musically applicable sampling. Velocity switched attack changes, all new keymaps, and new Programs all take advantage of Version 3 parameters.

Even the Effects were completely redone to produce ambiences that are cleaner and quieter than those found in the Internal ROM. Finally, every controller, including Vlocity, Mod Wheel, Data Slider, and Pressure were put to use to create realtime “performance instruments” instead of merely playing back a sample on a key press.

These samples exhibit the same timelessness indigenous to Kurzweil instruments. Let’s face it, there are many sample libraries featuring thousands of bizarre and trendy sounds which end up on a shelf to impress the gotta-have-every-sample-in-the-world crowd, and then there are those instrument samples which actually get used professionally as standard working tools.

Check out Complete Stratocaster. The first program you pull up plays Mutes on soft velocities, Open Sustain on medium velocities and Harmonics with Feedback on hard velocities. Playa lick with varying velocities and you’ll hear the expression we’re talking about. Now try Orchestra for the most powerful realtime punch you’ve ever had under 10 fingers! Or, surround yourself in ambient stereo FX with Fireworks, Jungle, Thundar and War. Industrial Sounds will take you to new rhythmic grooves that make you rewrite all of the rules!