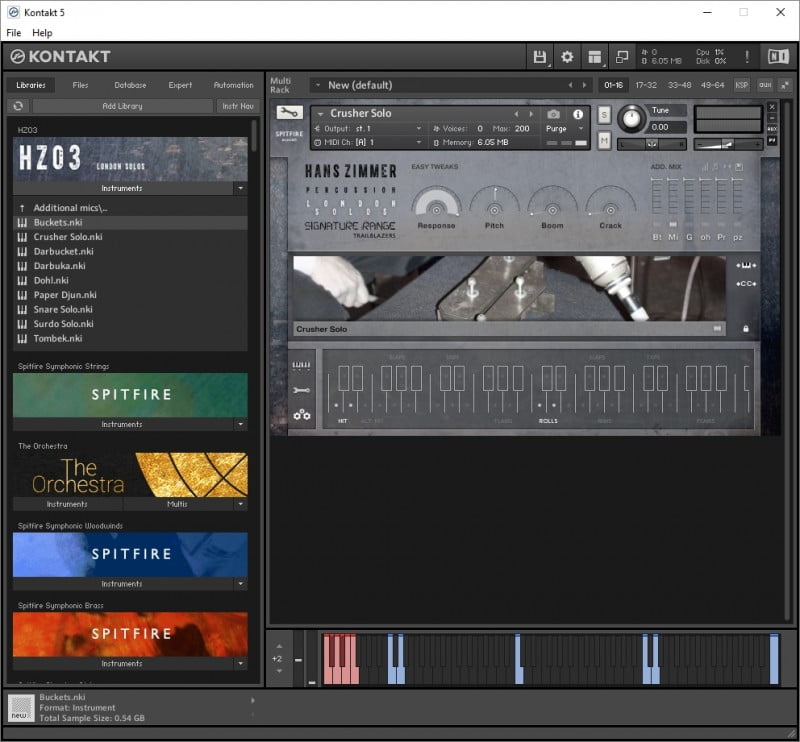 The definitive collection of Hybrid Cinematic Widescreen percussion, produced by the man who created the idiom. This volume expands on the breadth of solo content found in HZ01 with a selection of detailed and deep sampled solo drums performed by percussion guru Frank Ricotti. Recorded by Geoff Foster at Air Studios and mixed by 3 Oscar & Grammy winning composer / producer / engineers.
Long term Hans collaborator and percussion legend Frank Ricotti plays the definitive anthology of percussion instruments and styles developed over ten years of blockbuster score making. Volume 3 completes the Hans Zimmer percussion project with a beautiful selection of solo instruments that offer added bite, detail, focus, clarity and nuance to this epic series. Hans loves the quiet layers more than any other so whilst, as Frank would put it, the “twat it” layers give you the bitey thunder you’d expect, the lower layers offer up the potential for engaging delicate drum programming to help tick your cues along.
Instruments played in a variety of ways include: Bucket, Snare, Crusher, Paper Djun, Tombek, Dohl, Darbuca, Surdu, Darbucket.
HANS ZIMMER is one of the most successful, influential and prolific film composers of his generation. Having won countless awards (including an Oscar accompanied by an embarrassment of academy nominations). HZ’s scores have underscored a generation of hugely successful films, that have turned over billions of dollars, countless awards and critical acclaim. Hans has defined not only a compositional style, but also production approach and sonic innovation that has influenced a generation of composers.
Spitfire Audio are delighted and honored to present a series of products produced by Hans Zimmer and his diamond class team of grammy winning engineers, musicians and technicians. Where Hans Zimmer’s style approach to sonic creation is often copied or emulated we’re proud to present to the world at large HZ’s definitive take on his trailblazing approach to cinematic percussion production. Herein lies not an emulation or synthesis of his approach, but a recreation. The same studio, musicians, instruments, signal chain and talented engineers, sitting alongside a decade of experience, innovation and refinement overseen in every detail by Hans himself. The same excruciating attention to detail, perfection but most importantly the endless choice for tweakability and customization you’d expect of such a well decorated sound-smith.

FEATURES
Recorded at Air Studios via an impressive signal chain. 96 rarefied microphones, into Neve Montserrat pre-amps, the world’s largest Neve 88R desk (which was exhaustively re-gained at every dynamic layer for optimum signal quality), via a dual chain to HDX and Prism converters running at 192k. Well over 30 TB of raw material from these sessions alone.
The London Solos sessions features Frank Ricotti; the cream of Hans Zimmer’s hand picked percussion corps playing a distillation of a decade’s worth of musical experimentation and innovation. This is not an imitation of techniques explored in films including Gladiator, Black Hawk Down, The Dark Knight and Inception. It is a truthful recreation. This library perfectly blends with the ensembles volume (# 1) but many users favorite this volume for detailed cinematic percussion parts. Hans loves the quiet hits, so special detail has been afforded to the lower dynamics, for intriguing and engaging patterns full of life and humanity.
As proven in Volume 1 where you put the mic makes a huge difference to the sound, so this volume too consists of a number microphone positions (as detailed below) mixed in stereo by Grammy and Oscar winning composer / producer / engineers: Hans Zimmer, Alan Meyerson and Geoff Foster.
We have recorded the following drums and articulations each with up to 9 round robins and 6 dynamic layers per hit, at Air Studios through the finest microphones, the finest Neve pre-amps into the Neve 88R desk via prism AD converters at 196k 32 bit floating point (which we have SRC’d to 24bit 48k).
GUIS

THE OVERVIEW PANEL
Gives you a quick and easy way to access, view and load the different articulations, mic mixes and essential controller functions which you can then re-assign to suit your workflow.

GENERAL CONTROLS PANEL
A deeper but still simple UI panel that allows you to tweak the general settings. How many round robins you would like and how you would like them to behave. How would you like memory to be organized alongside pitch options and how velocity works.