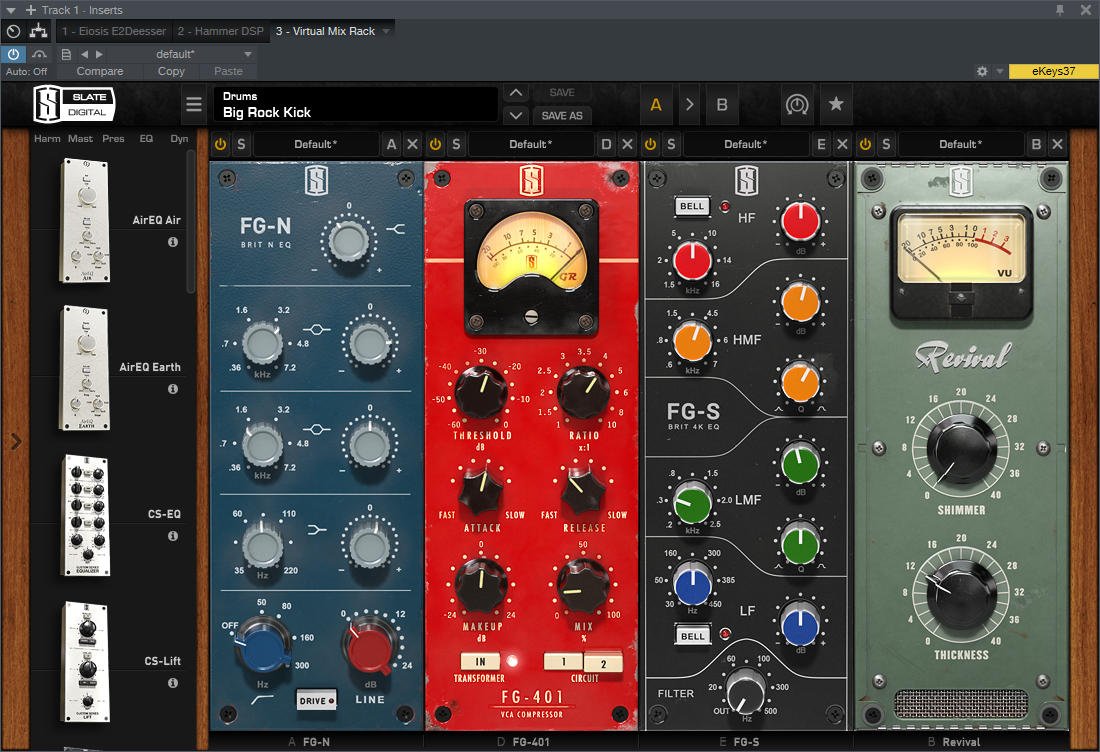 The ‘VMR’ operates as a Virtual 500 series rack with hot-swappable modules, putting your whole processing chain in ONE WINDOW. This allows you customize your own channel strip, with signal flow following the modules, in any order you choose. Mix and match filters from different EQs. Chain an EQ before or after your compressor. Moving modules around is easy, fast, and creates no break in audio playback. Audition signal chains faster, easier, and in real time with the Slate ‘VMR’.

The FG-N is a digital recreation of one of the most classic discrete Class A British equalizers from the 70’s. All aspects of the circuit are modeled, including the rich harmonics and saturations that naturally occur when the equalizer is in use. The original model only contained one mid band, so we thought it would be nice to double it so that it has two mid bands. This equalizer is lush, fat, and bold. It sounds great on everything from drums to vocals, and can even add the perfect saturation to synth and electronic tracks.

The FG-S is a digital recreation of one of the most famous British console equalizers from the 80’s. This equalizer also has rich harmonics and interactive mid bands with a fat musical tone. This is the ultimate workhorse mix eq that can be used on any track. It is great for surgical cutting strokes, or wide bell and shelf strokes for making drums and guitars punch out of the speakers.

The FG-116 is the most precise digital replication of the classic American FET limiter. No expense was spared to capture every nuance of this classic sounding compressor/limiter. From its trademark timing characteristics to the extremely musical sound of its transformer, the FG-116 will give engineers the musical and fat tone that has made the hardware so famous. The FG-116 sounds great on everything like lead vocals, drums, and bass guitars.

The FG-401 started as a recreation of the classic british console channel compressor, but morphed into quite a lot more. First, we gave it variable attack and release with increased range which added more tonal options. But then, we added an optimal transformer inout, and not just any transformer, the famous transformer from the British Class A Console! This adds a beautiful warmth and sheen to the compressor. Last, we added an entirely unique second circuit path that provides and additional smooth and rich tone. The FG-401 is perhaps the most versatile mix compressor in the world that can sound good on any source you feed into it.

Unlike so many ‘analog modeled’ equalizer plugins and compressors that simply recreate analog equalization and compression curves, the VMR models every nuance of the circuit paths and recreates all of the essential harmonics, saturations, phase, and interactivity that give the units their trademark tone.

The VMR plugin is also modular, and new processors will be added in the future which will further enhance its powerful functionality.

Note : Remove the previous version of the plugin.