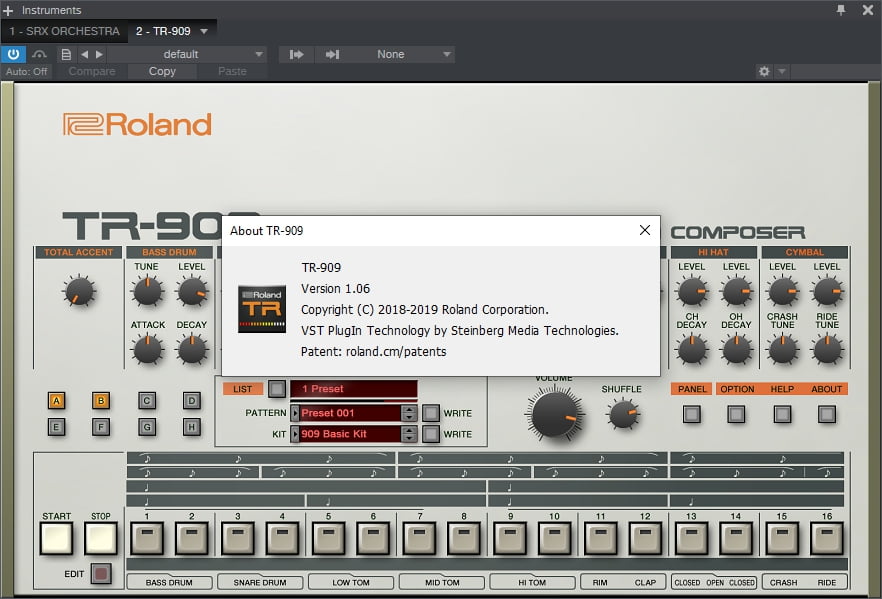 Description : A month after the release of the official VST version of the Roland TR-808 drum machine , the Japanese company released a virtual version of the Roland TR-909 drum machine Software Rhythm Composer. Roland TR-909 VST plugin was developed by Roland Virtual Sonics studio and is available to all subscribers of the Roland Cloud cloud service.
Representatives of Roland note that the new plug-in is the first official virtual version of the legendary drum machine, which accurately reproduces the sound of the original instrument. The sound transmission and generation schemes were reproduced using a special modeling technology, Analog Circuit Behavior, which allows to achieve the most accurate and similar sound equipment. For greater verisimilitude and interesting sounding, the developers equipped each pattern and each sound with eight variations that switch randomly during use.
In addition, the plug-in has a 16-step step sequencer “TR-REC”, which allows you to create sequences for each percussion and percussion instrument. The sequencer is equipped with randomization and blending settings, support for sub-steps and rich possibilities for creating fusions. According to the developers, the sequencer is suitable both for creating simple drum parts, and for working with polyrhythmic and complex drum lines. All patterns can be freely imported into the project inside DAW as an audio or MIDI clip.