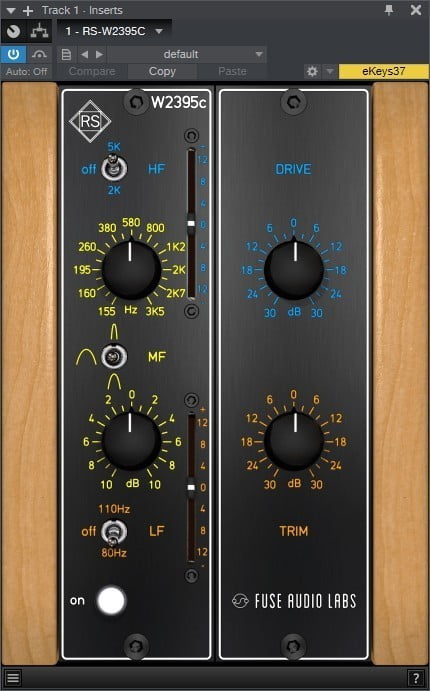 Description : A set including from plugins:

Bucket-500 v2.0.1 – is an authentic emulation of the analog delay circuit based on BBD. The company has added some features to the digital display, including stereo feed, LFO and control flexibility. They also expanded the initial time range to 10 … 1000ms and included setting the host tempo synchronization. The idea behind the Bucket-500 is to offer you an easy-to-use processor that still has the versatility to create wide, stylish sounds.

DrumsSSX v2.0.1 – is an abbreviation for Source Separator and Re-mixer. This all-in-one solution, which is designed to separate mono or stereo drum recordings into their components so that they can be mixed individually when there is no multi-track signal. DrumsSSX opens up a world of remixing and processing capabilities that cannot be achieved with conventional tools such as equalizers, compressors, transformers, or even multi-band processors.

F-59 v2.0.1 – a recreation of the classics of the era ’58 – ’60, which set the course for decades of guitar amp technology. Offering a wide range of tones, the plugin tries to stay true to the original vibes, adding convenient features to the digital realm.

TCS-68 v2.0.1 – a virtual simulator of an eight-track cassette port of the studio.
The TCS-68 includes precise emulation of the preamplifier, tape system, and equalizer. The original analog unit consisted of a powerful 10-channel mixer, which included simple 3-band equalizers, microphone and line inputs, as well as inserts for each channel, an 8-track recorder with an advanced noise reduction system and a clearly adjusted measuring bridge.

VCL-4 v2.0.1 – is a thorough emulation of an optical compressor, manufactured in the 60s of the twentieth century. Each individual unit of the original device is emulated. The processor has a very musical program-specific compression characteristic, perfectly suitable for processing any sound material.

VCL-373 v2.0.1 – a virtual simulator of a rare compressor-limiter of the early 60s, which was present in many master studios.

VCL-864U v2.0.1 –  is a recreation of the cult limiter with powerful additional controls and features. This plugin is ready to do incredible things for your mixes, but believe it or not, the limiter that it models has its roots in wartime communications, not in music. It was mainly used by the US military during the Korean War. His original manual even contained useful tips on how to protect the device from the hands of the enemy, and several methods of destruction. In the end, the world found out about the superior compression capabilities of this device, and it has become very popular in the communities of audio engineers and music producers.

VPRE-376 v2.0.1 – is a very accurate emulation of the Telefunken V376 Preamp preamp. The plug-in fully recreates the work of all components of the original and easily decorates any audio signal.

VQA-154 v2.0.1 – is a re-creation of the ADM 1540, the popular 4-band equalizer of the 70s, which made its way to many broadcasting and production studios around the world. This is a very versatile and easy-to-use equalizer that provides a cool and pleasant sounding color that always sounds musically.

VQP-258A & VQP-259A bundle v2.0.1 – a set of two plug-ins that emulate the vintage devices of the 258-A and 259-A of the 50s. Both plug-ins are exact copies of the original devices (passive equalizer and low-pass / high-pass filter) and offer intuitive controls. VQP-258A and VQP-259A are able to independently process the frequency ranges of the signal and produce point equalization. The VQP-Bundle set was developed using modern circuit simulation methods that take into account all the subtleties of the original iron devices, including band interaction and transformer saturation.