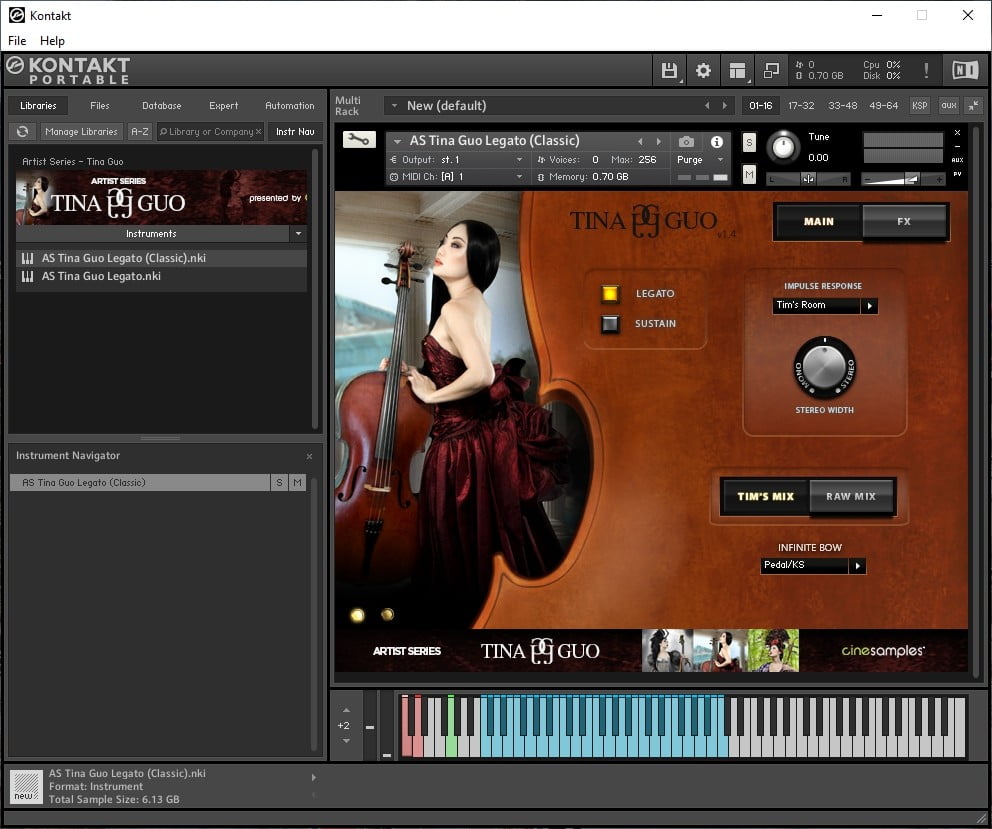 Description: Tina Go’s very emotional acoustic cello, recorded as a solo legato patch using the Cinesamples recording and programming technique – seamless legato! Recorded at the legendary MGM at Sony Pictures Studios in Los Angeles, the instrument includes the CineStrings Solo Legato Cinesamples engine and Infinite Bow feature.
We are pleased to announce that Tina Guo Acoustic Cello Legato and Tina Guo now have the Infinite Bow feature found in all of our solo string products: Tina Guo vol 2, Taylor Davis, CineStrings SOLO and Viola da Gamba.
By default, Tina’s bow changes naturally to sustained notes. Use a sustain pedal or green rocker switch in front of the sustained note to extend the bow length as needed. This is understandably unnatural, but it provides the necessary bow length needed for slower tempos. Just attack the note again when you need to change the bow on the same note.
The Acoustic Cello Legato patch, first introduced as an addition to our Artist Series sound design library – Tina Guo, has been available for individual purchase by popular demand! Thanks to a completely new approach to legato programming in 2014, dubbed Seamless Legato, Tina’s expressive solo performance on an acoustic cello was captured at MGM at Sony Pictures Studios and brought to you as an accessible and intuitive legato patch. Tina’s signature sustain sound blends seamlessly with your string ensemble compositions as a popular instrument and brings a fresh voice to your section.
Tina Guo has established herself as a classical acoustic cellist, heavy metal electric cellist and composer. Her inimitable sound and improvisational style has been used in major films, television, and games. Having completed formal training at the University of Southern California, she enjoys experimenting with a wide range of effects and digital processors, constantly expanding her sound.