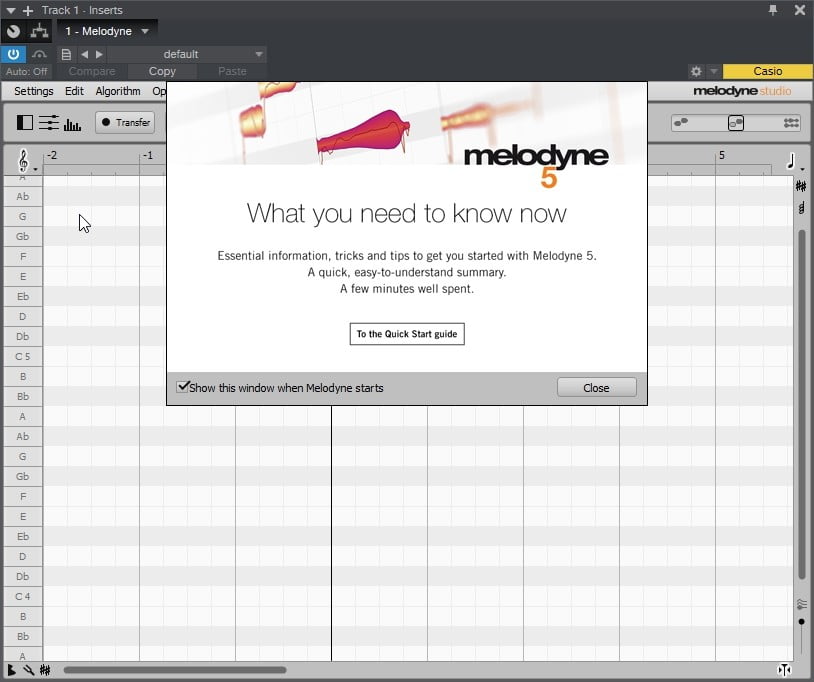 Description: This program allows you to work with recorded monophonic audio data in the form familiar to the musician – editing and changing the sound is done by directly adjusting the musical and melodic characteristics of the audio. Namely, the program reads the original mono audio material, analyzes it, on the basis of which it presents the audio data in the form of sections (samples) of this material scattered over the corresponding notes (having previously marked the rhythm grid). Now the user can take individual sections of the audio and raise / lower them along the stave, which will accordingly be reflected in the pitch of the sound – thus, the pitch is edited. In a similar way, you can change the duration of the sounding sections (time-stretch), as well as the formant composition, amplitude and other characteristics. The program allows you to work with 24 audio tracks simultaneously. It should be noted the very high quality of the sound processing algorithms. Using the program can be extremely useful, for example, when correcting vocals.
Note Level Editing: Melodyne gives you unrivaled access to all the musical details in your recordings right at the note level. This is made possible thanks to a comprehensive analyzer that delves deeply into your recordings and samples, as well as recognizes and understands the musical relationship within them: individual notes and their characteristics, scales, keys and chords, time, tempo, tone color. And with Melodyne, you can edit all of these things intuitively: both vocals and any type of instrument, including polyphonic ones like piano and guitar.
Notes and Instruments: In Melodyne, notes are represented by drops. By manipulating them with powerful tools, you can edit (among other things) the pitch, vibrato, volume, sibilance, length, time and formants of each note. Thus, you can literally enhance the intonation, expression, dynamics and timbre of your performance. While ingenious algorithms ensure that traces of editing are almost always invisible, and the result is delicate and natural.

What’s new in version 5 :
New technologies in less time: With a fundamentally improved Melody algorithm, Melodyne makes your vocal editing even better than before. With perfect, natural key press fixes. Thanks to the Chord Track, you can adapt notes at lightning speed to suit the song, including chord recognition. And with the unique Fade Tool, you can create note-based fades – even in polyphonic recordings and samples.
All this is new:
– the ability to edit tonal and noise-like components separately using the “Melodic” algorithm
– more musical analysis of pitch deviations
– chord track and chord grid for pitch editing, chord recognition
– Fade Tool and Leveling Macro for editing dynamics
– additional algorithm (“Percussive Pitched”) and other algorithm improvements
– search functions for keyboard shortcuts, saving sets of keyboard shortcuts
The vocals are even better: Melodyne confirms its primary purpose. The Melodic algorithm used for vocals can now distinguish between unrelated noise-like components of notes — that is, voiceless consonants (such as sibilants like “s”) and breath sounds. Even when they match. While all pitch and sync changes are implemented in a proven manner with respect to tonality components, various rules that accurately mimic the natural behavior of the human voice govern the manipulation of sibilants. So now when you work with Melodyne, you automatically get the best possible sound quality and the most natural results.
Professionals will be delighted to know that it is no longer necessary to manually isolate each individual sibilant. This saves a lot of time and provides a more meaningful display in the note editor. At the same time, the results sound much better as the automation works more accurately and takes into account the “overlap” between sibilants and tonal components.
Sibilant detection brings not only acoustic benefits, but also new creative possibilities: with the Sibilant tool, you can adjust the balance between sibilant and tonal components of a note. Sibilants can be weakened, muted, accentuated, or even isolated – anything is possible. This way you get the perfect de-esser that only affects problem areas and does not have side effects on other components of the vocal sound.
Modeled after the human ear: Why do some notes sound different from others? Pitch fluctuations affect the timbre of vocal performances because it is through them that passion and emotional complexity find their expression. In other words, they give it a human dimension. But in order for their contribution to be positive, the nature, scope and precise timing of such fluctuations are critical.
A note does not necessarily sound harsh or even just because it is not “mathematically accurate.” It’s just that isolated, often very short fragments annoy us. Sometimes at the beginning, sometimes at the end, sometimes somewhere in the middle. It is these important segments that need to be perfectly tuned. The presence of any vibrations before or after such segments does not bother us – on the contrary, we feel that they add life and naturalness to the sound.
Melodyne now accurately identifies these problem areas and the offset displayed in the Note Inspector is calculated from the pitch of each note only at the key moment, rather than across its entire time. As a result, double-clicking (to set the note offset to zero) now gives exactly the correct musical result.
Chord Grid & Track: Work efficiently with chords, quickly adapt notes. Melodyne 5 offers you a chord track that links to the Pitch Grid in the note editor. This makes working with chords much easier and easier, and harmony more understandable. Because you can see at any time which tones are compatible with the current chord and the ability to adapt notes accordingly at lightning speed. This is useful when you are changing chords and if you want to harmonize any sample with your music. It works like a dream!
Autopilot for chords. Melodyne’s chord recognition technology is so advanced that it can look at tracks individually or together – even the entire mix and identify the chords formed when their notes are combined. It analyzes your recordings quickly and reliably and automatically fills in the chord track. This makes working with chords even easier.
Dynamic Editing: The Fade Tool gives you very effective control over the dynamics of your recording. For each note individually. Even in a chord. It is unique and offers completely new creative dynamic editing options. And since in Melodyne the fades are owned by the notes themselves, they are automatically saved when you move or copy notes.
Dynamic range control. Leveling Macro makes it loud the notes are quieter and the quiet ones are louder, it adjusts the difference in volume. Even – thanks to Melodyne technology – in polyphonic recordings. Therefore, if one or more notes in a chord are too quiet and muffled by the rest, you can easily raise them to the desired level.
Improved algorithms – “Percussive Pitched”. This new algorithm was specially developed for instruments such as the tabla, berimbau or 808, whose notes, although percussive in nature, still have a recognizable pitch.
“Robust Pitch Curve”. With this new option, you can get better sound quality when editing certain signals, such as those with a lot of reverb. When activated, monophonic algorithms use a pitch curve that has been slightly blurred.
“Complex”. This type of reproduction has been improved and can now be used as flexibly as “Tonal” for formants.
No more .mdd files. Melodyne data, which was previously saved as separate “.mdd” files, is now stored in the audio files themselves, making file directories clearer and easier to share projects.

New in version :
** Features and improvements **
* macOS 11 Big Sur: Melodyne 5.1 is compatible with macOS 11 Big Sur on Intel-based Macs as well as on ARM-based Macs under “Rosetta”.
* DAW-oriented keyboard shortcuts: We are always looking for ways to make the operation of Melodyne even easier for users of digital audio workstations. That’s why we’ve included sets of keyboard shortcuts customized for Pro Tools, Logic, Cubase and * Studio One in Version 5.1. You can choose the set you want from the Shortcuts page of the Preferences dialog.
* Exporting lead sheets: It is now possible to export the contents of the Chord Track as a lead sheet via MIDI; you will find the relevant command in the Chord Track’s context menu.
* Algorithm selection: During ARA operation with Cakewalk, Melodyne’s Select Algorithm menu is now displayed prior to any MIDI export.
* ARA improvements: The interaction with ARA DAWs has been optimized in various ways – partly to ensure compatibility with future DAW versions.
* New keyboard shortcuts: It is now also possible to assign keyboard shortcuts to the following commands: “Show Sibilants”, “Note Leveling”, “Copy Song Data to Note Assignment…” and “Copy Note Assignment Data to Song…”.
** Bug fixes **
* A keyboard shortcut assigned to “Toggle Cycle Mode” now also works reliably when Melodyne is running as a plug-in and under ARA.
* MIDI export has been improved and muted notes are no longer included in the export.
* Under macOS, keyboard shortcuts using the function keys are now also correctly displayed in the menu.
* The “Set Cycle to Selection” function now also works correctly in Studio One.
* When you stop playback in Pro Tools, the playback cursor in Melodyne now remains where it was when playback was halted, instead of springing back to the previous start position.

Some antivirus (like Avast) block links from Adf.ly short-link.

For access the links just disable your antivirus temporally.