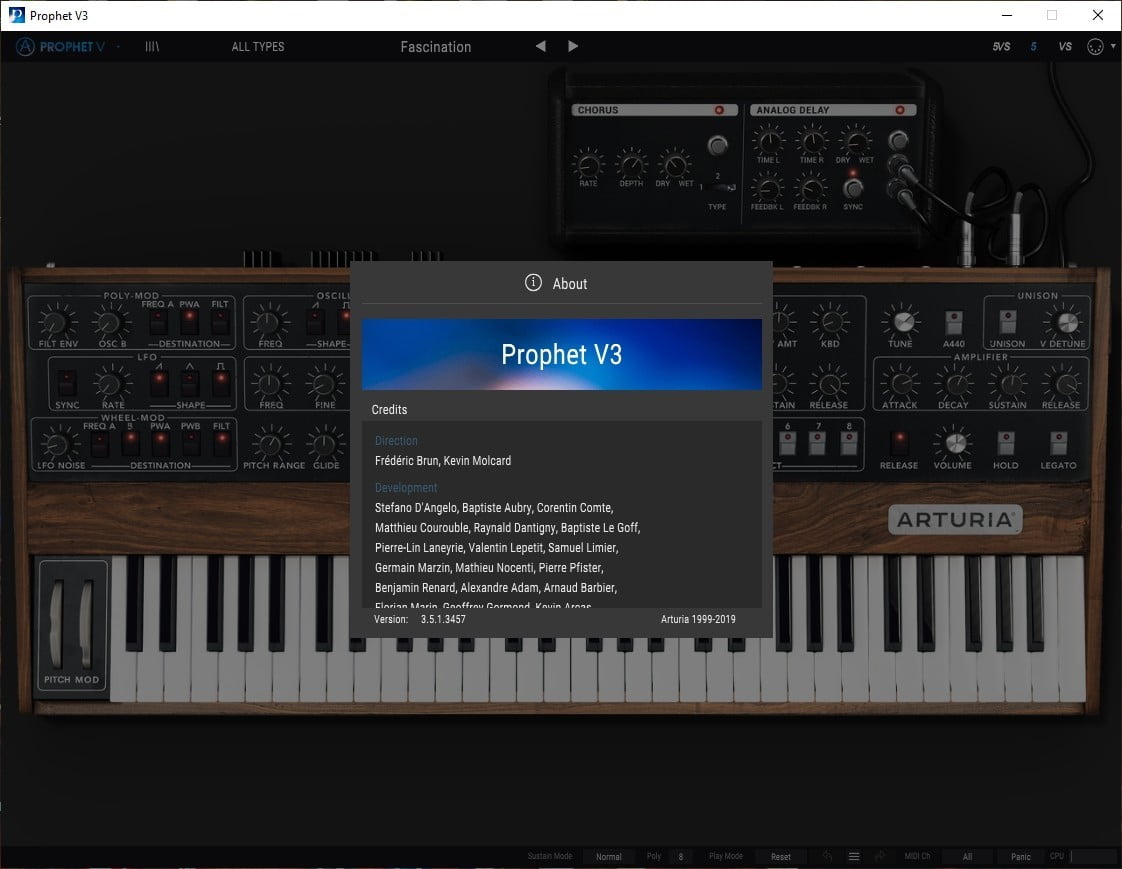 Description of plugins :
The ARP 2600 is a truly versatile sound creation tool that still takes its place in modern music. Thanks to the unique combination of semi-modular architecture and related routing, the instrument has become one of the most versatile synthesizers of the 1970s.
Buchla Easel is the reincarnation of a landmark tool that helped define the West Coast experimental modular synthesis of the direction in the early 70s. Our enhancements give the instrument significant advanced features for sound design and avant-garde music.
CMI is the reincarnation of the first commercially available digital separable system in the history of music, the sound powerhouse behind many of the early megahits of the MTV era. We even went the extra mile and added new creative features that were not available in those days.
CS-80 – The virtual model can do the same as the original could do, but in addition it has a modulation matrix and multi-layer Multi mode, which significantly expand the tool’s potential. As with all Arturia virtual instruments, no aliasing operates in this model, that is, there is no internal “reflection” of frequencies from the upper end of the range, which leads to the appearance of spurious sound tones.
CZ – Models the Casio CZ-101 and CZ-1000, two iconic synthesizers behind many of the 80s pop hits. It adds a ton of new features that make it a tool for ages.
DX7 – In 1983, the DX7 changed the world of music. Today, the DX7 V gives you the opportunity to change it again.
Nothing says better about the 80s like the sound of the DX7. Our authentic synthesizer gives you all the same FM technologies and sounds that the instrument gave, which has taken an esteemed place in the history of keyboards and modern music.
Jup-8 – The Roland Jupiter 8 synthesizer, perhaps the least, requires a special introduction. Immediately after appearing on the music market in the early 80s, it instantly gained worldwide recognition and, despite its age, is still popular.
Matrix-12 – Times are changing, and now all the possibilities of the original tool have been transferred by Arturia engineers to the virtual Matrix-12 V. And, according to the established tradition, some additional functions were added to them, which were not in the original.
Mini – the instrument is an “extended”, as is customary at Arturia, a copy of the well-known Minimoog D.
Modular – This huge modular system has shown that electronics can be musical, so it is the catalyst for every synthesizer we see today. We revived the uplifting modular synthesizer that has dominated the music world since the 1960s.
OB-Xa – Exactly recreates the rich sound of Oberheim OB-Xa. An instrument that has long been lacking in the collection of the French company. The synthesizer is completely ready to create whipped bass, chic spatial pads and juicy parts of electronic winds. The company notes that the OB-Xa V is supplemented by a number of features that were not in the original. So the synthesizer received the Stereo Spread function, a built-in arpeggiator and more LFOs.
Pigments – A very powerful virtual analog tabletop wave synthesizer is Pigments and it will change the way music is created. Turning a spark of imagination into sound is the most important, exciting part of making music. Pigments makes this process natural, intuitive and vibrant.
Prophet – Prophet V virtual synthesizer contains the stuffing of two instruments: Prophet 5 and Prophet VS. Separate screen interfaces are also prepared for access to them.
SEM – software emulation of one of the most famous synthesizers of the Oberheim brand – SEM. The virtual model perfectly combines warm musical tones accurately reproduced with TAE technology with a full range of innovative features
Synclavier – The possibilities of sound generation of a virtual instrument are almost endless, but, of course, a lot of work needs to be done to implement them. Some idea of ​​the potential of the tool can be compiled from factory presets, of which a huge amount is recorded, but they do not cover the whole range of its capabilities. Some presets show precisely complex chains of samples, with a multifaceted and continuous “sweep” of the timbre.
Synthi – Synthi V fully reflects the spirit of the unique analog synthesizer that appeared in London in the 70s to We inspire the whole developing world of electronic music, and has new superpowers that inspire our world today, and your music will sound differently.