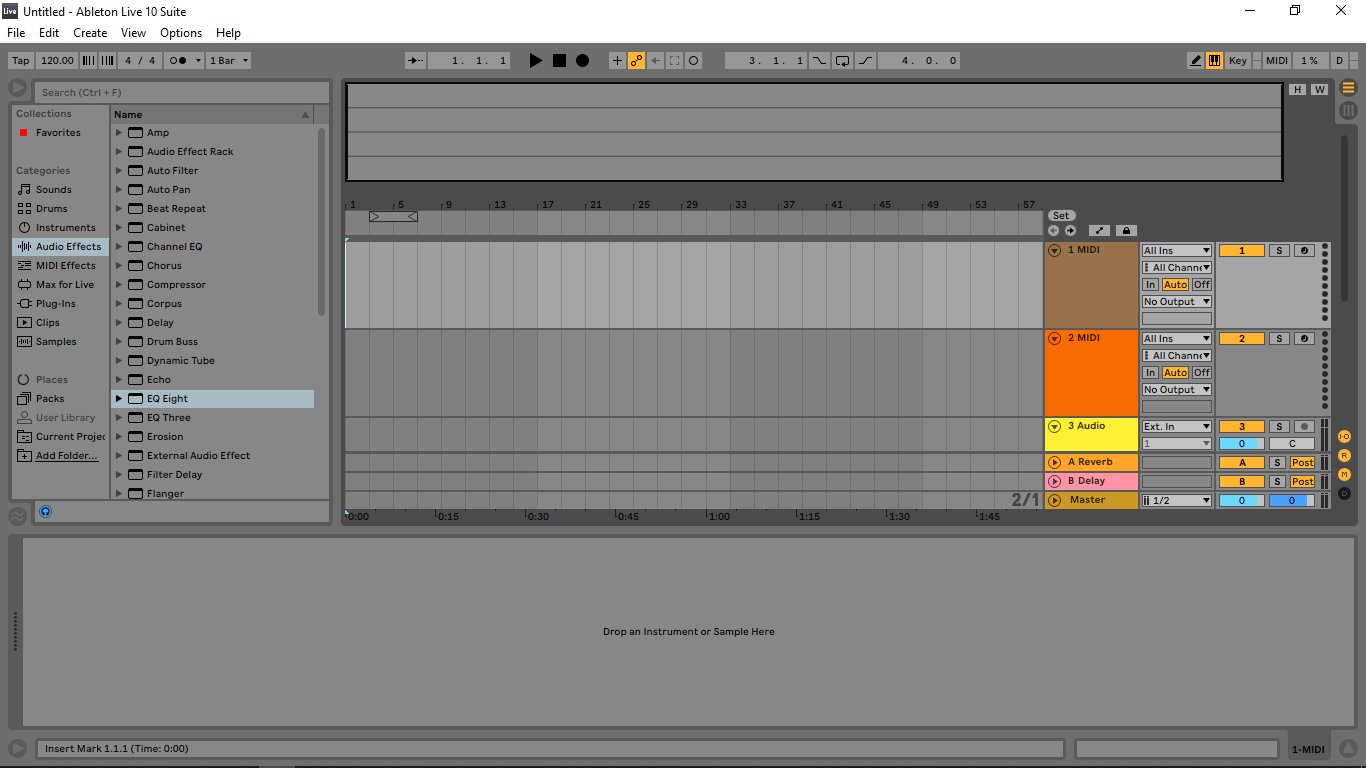 Ableton Live allows you to easily create, produce, and play music in one intuitive interface.
Live synchronizes everything and works in real time, so you can play and change your musical ideas without interrupting the creative process.
But Live also has a revolutionary Session View: a unique notebook for improvisation, playing and playing with musical ideas, without time limits. Start and stop any number of audio or MIDI loops freely and independently – everything remains synchronized. Almost everything in Live works in real time – add, reorder or delete devices, play with flexible routing of Live tracks and much more – all without interrupting the creative process. Create bolder sounds with new Live devices. Stay on stream with many workflow enhancements. Get farther away from your computer with Push. Create your own sound using a curatorial library. And get the unlimited potential of Max for Live, built in seamlessly.

New Features and improvementsInterface Improvements
When creating a time selection on a Group Track using keyboard commands, the selection behavior is now consistent with dragging with the mouse. This also applies to Group Tracks when making a time selection across multiple tracks.
Filenames containing Chinese and Japanese text are now properly indexed and searchable in Live’s browser.
The translations for the Show Link Toggle and Start Stop Sync buttons is now consistent with other buttons in the Preferences.
Device Improvements
When toggling between Width and Mid/Side Mode in the Utility device, the layout positions and size no longer change.
In the Delay device, it is now possible to toggle the filter on and off by clicking on the “Filter” text label next to the Filter On switch.
Push 2
Updated Push 2’s firmware to version 1.0.69. This firmware version fixes a bug that prevented LED animations from working, under certain circumstances.
VST3
VST3 plugins can now use the PreSonus VST extensions to observe the name and index of the track they are on and to control Live’s track volume, pan, mute, solo and sends. This support has been developed and tested against Softube’s Console One plugin but will also work with other plugins that implement the extensions.
Max for Live
Updated the bundled Max build to version 8.1.1. For a complete Max 8.1.1 changelog, visit: http://cycling74.s3.amazonaws.com/support/version_8_1_1.html
OS Support
eLicenser protected plug-ins are working again on Mojave/Catalina.
When using a plug-in that wants to use Apple Events (such as eLicenser protected plug-ins), a localized text requesting permission appears in the macOS dialog, when the system language is set to German, Spanish, French, Italian or Japanese.
Bugfixes
Interface
Previously, zoom-adaptive grid lines would shift off position when their width was adjusted in the Arrangement or Detail View.
Fixed a crash that could occur when pasting Group Tracks, in certain circumstances.
On Windows, dialogs are now always centered on top of Live, even if Live is maximised.
Using a pinch gesture to vertically zoom the MIDI Editor and Arrangement tracks now works as expected on Windows.
Previously, fades would flicker when the cursor moved over fade handles.
Fixed a bug that prevented resizing a track by pressing ALT and scrolling with the mouse, if the track was placed after a folded Group Track.
Fixed a crash that could occur when dragging a template Set from the User Library into the Session View.
Fixed a bug which caused Live to hang when a Set contained very short Arrangement clips.
Fixed a crash that could occur when dragging or copying and pasting an unwarped clip over a tempo change.
Previously, notes playing in Session clips would be re-triggered by note chasing when the Arrangement loop caused playback to jump backward in time.
Auto-updates no longer interrupt the file recovery process after a crash.
Devices
Fixed a crash that occurred when trying to unfold a missing sample item in the File Manager, if the sample was used as an imported waveform in the Wavetable device.
Fixed a bug which prevented automation in the Wavetable device from playing.
Midi Recording and Editing
It is no longer possible for zero-duration notes to exist at the same start time as another note. This corrects various unwanted behaviors that previously occurred in the MIDI Note Editor when working with zero-duration notes.
Fixed unwanted behaviors that occurred when a track’s Arm or Solo buttons were mapped to MIDI CCs.
Live no longer crashes when pressing the Tab key while dragging MIDI notes.
Automation
Fixed a crash that occurred when redoing stretching or skewing automation envelopes.
Previously, duplicating a Rack chain would not result in duplicated automation.
Fixed a crash that could occur when a looped audio clip’s automation was overridden, under certain circumstances.
Copying automation envelopes from one plug-in device to another now works as expected.
Fixed some crashes related to automation envelopes.
Recording
Live no longer allows freezing tracks while recording. This prevents any possible loss of the recorded audio.
VST3 / Plugins
Previously, Live could crash when rearranging tracks containing certain VST3 plug-ins, if Push was connected. Also, if return tracks and/or the Master track were controlled and contained certain VST3 plug-ins, adding audio or MIDI tracks would caused unwanted behavior in track controllability and the plug-in device.
Fixed a bug that prevented VST3 plug-in parameters from updating correctly.
Live no longer crashes when running unlicensed Waves plug-in devices.
Fixed a crash that could occur when changing parameters in a plug-in device’s floating window while Key Map Mode, MIDI Map Mode or Macro Map Mode was active.
Fixed a bug that prevented the HALion 6 VST3 plug-in device from enabling multiple outputs.
Link
When Link is enabled, the tempo of the second Link-enabled app now adjusts to match the first Link-enabled app.
Control Surfaces
Fixed a bug that prevented certain plug-in devices and track controllability from working as expected.
The Note Mode of the selected track will be correctly recalled when loading a Set, if the selected track has something other than the default Note Mode selected on Push 1 or 2.
Max for Live
Max for Live devices will now correctly return to their normal state when ungrouped from a Rack while Macro Map Mode is enabled. This behaviour is now consistent as with other Live devices.
Fixed a crash that occurred when saving a Max for Live device that resided in the Master track, when the Crossfader had an assigned MIDI mapping.

How to install and activate

turn off the Internet.
1 . Remove or turn off antivirus 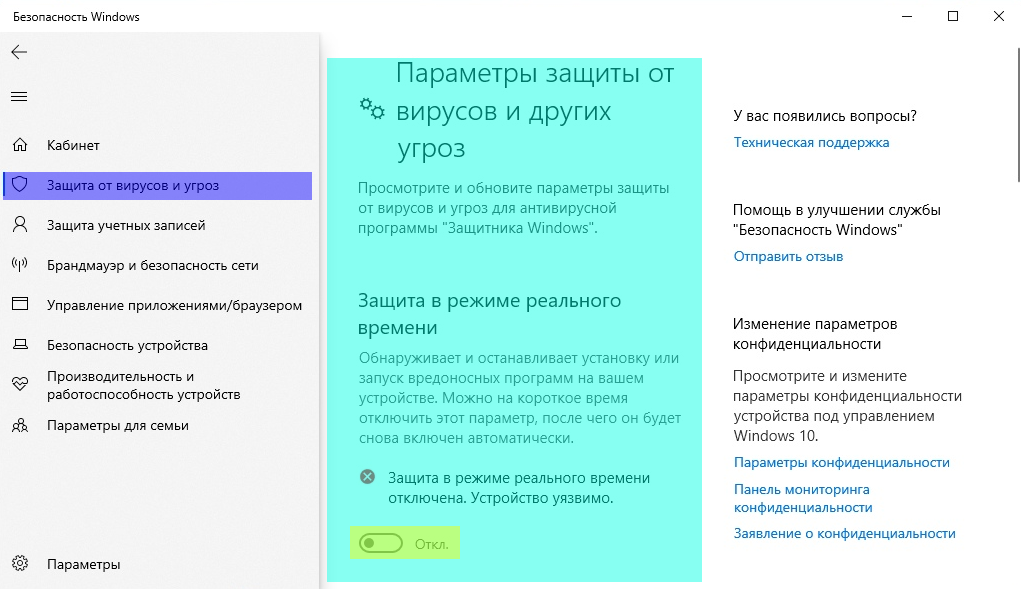 4 . Extract archive to the same folder 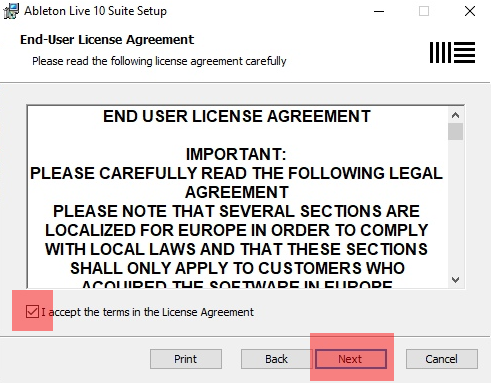 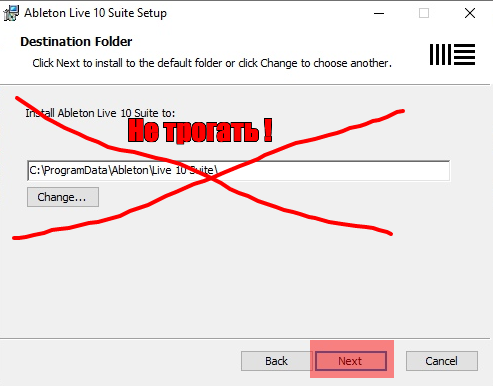 If the Next-Install button is not pressed, then you need to remove the shortcut from the start menu 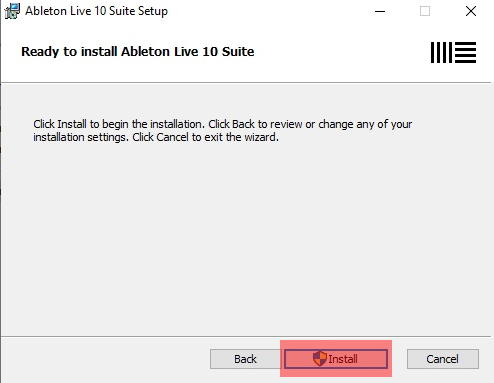 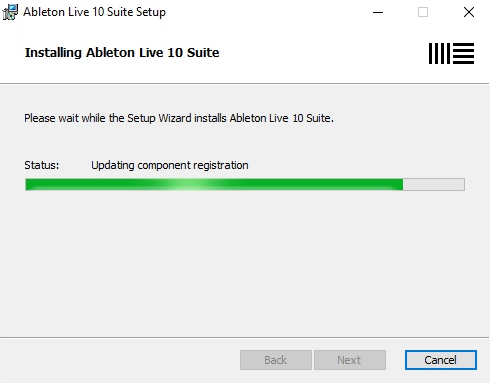 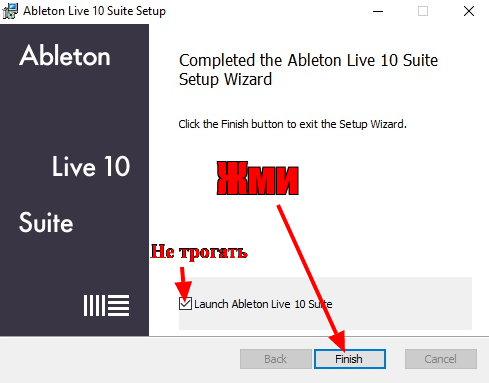 7 . The program has opened. Press no Internet on this computer 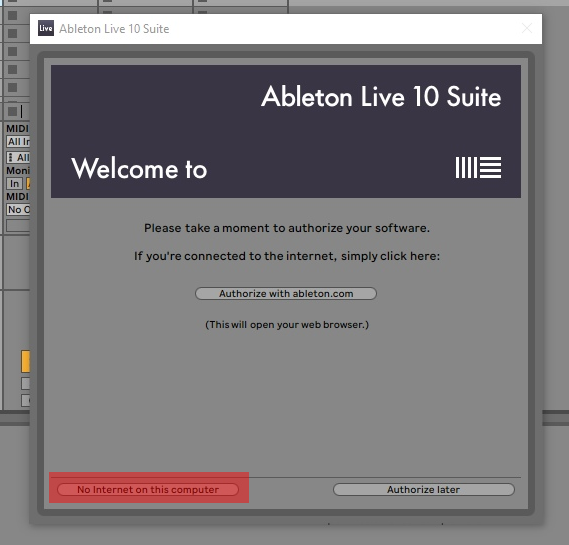 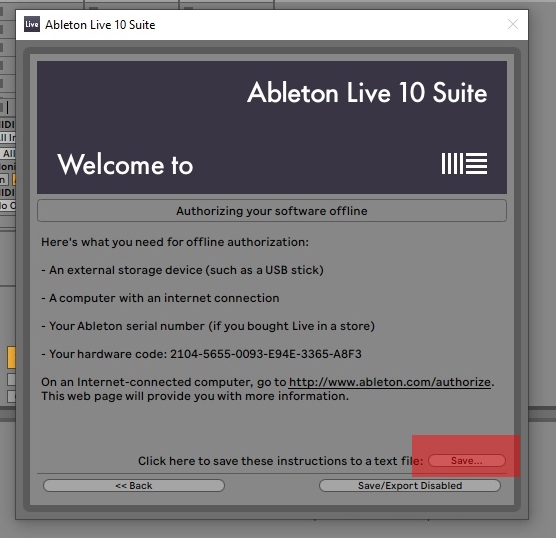 Will offer to save, save it to your desktop, for example 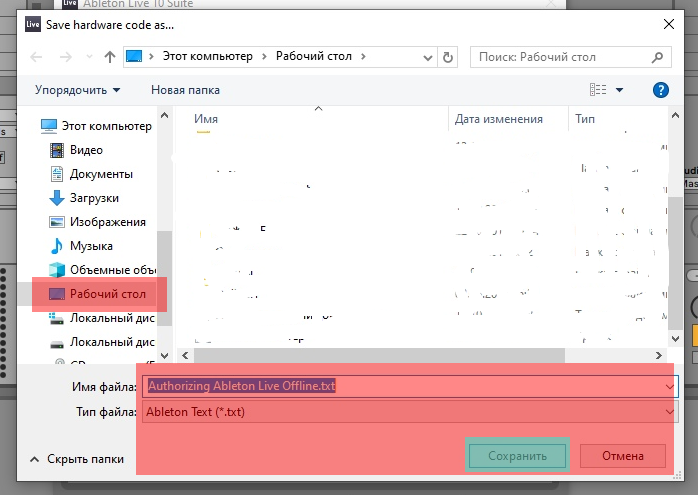 9 . A text document will open immediately and you copy it. 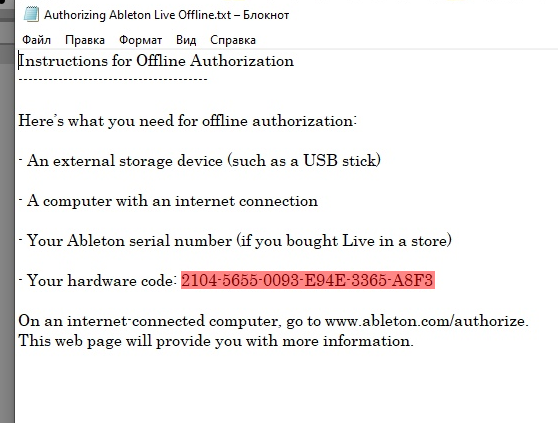 10 . Launch keygen on behalf of the Admin. Insert code 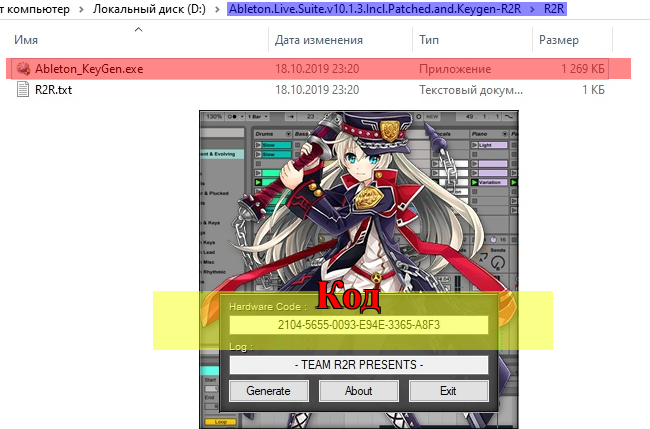 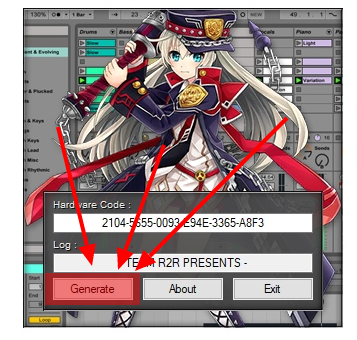 It will offer to save the license file. You save it at least on the desktop

12 . Activate like this. Move the license file to the Ableton activation window and release the button (drag and drop) 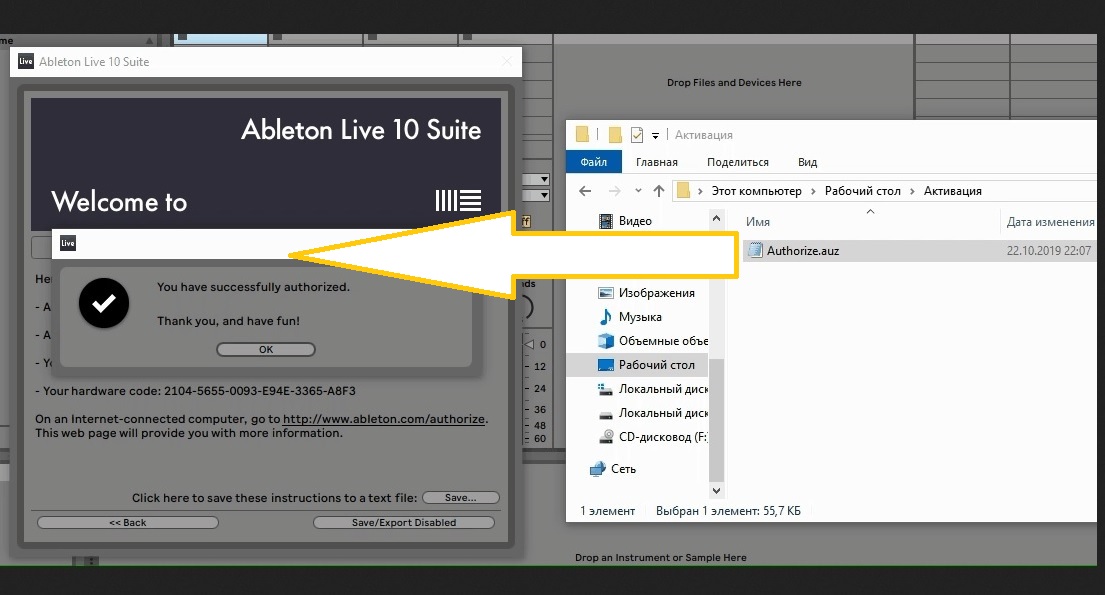 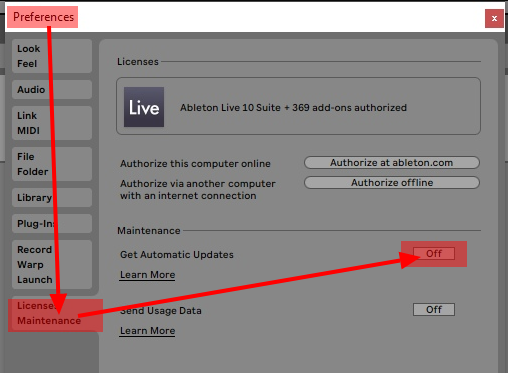