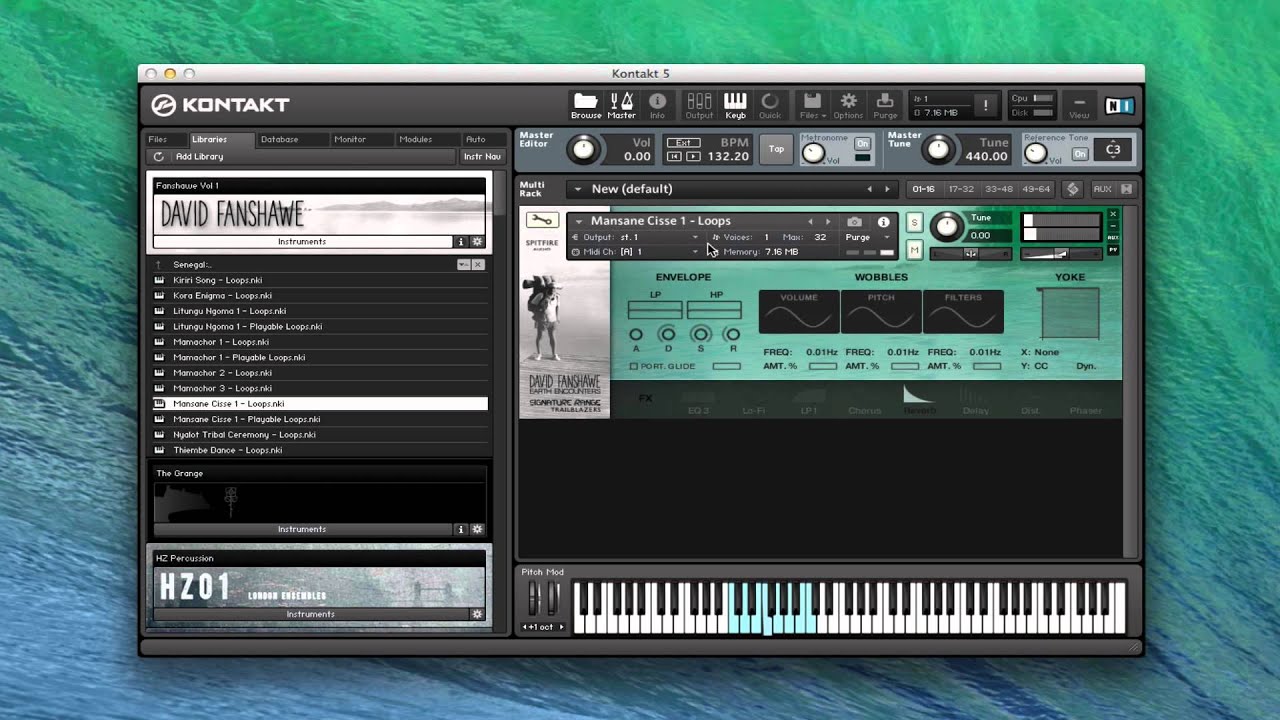 One world, one music
“Through the adventures of music and travel, I have been privileged to experience our world as a composer and musical explorer. It is my humble dream to go on sharing my aspirations with future generations through the legacy of my sound archives. ”- David Fanshawe (1942-2010)

Overview :
It is with enormous excitement that Spitfire presents the latest addition to its SIGNATURE musical trailblazers range: a collaboration with Fanshawe One World Music, under the direction of Jane Fanshawe. The EARTH ENCOUNTERS collection, of which this is the first volume, has been produced from a unique and extraordinary collection of sound recordings. The collection will help support the work being received to prepare the incredible archive that was David’s gift to the world for its eventual establishment as the premier resource for researchers and musicians the world over. The work includes cataloging and digitizing the entire archive with the aim of finding a permanent home within a national museum or university.
Background
One of Spitfire’s core aims is to capture inspirational musical performances and sounds which then provide the seed for future music. David was trailblazing this path while Spitfire’s Christian Henson and Paul Thomson were still at school. In 1978 African Sanctus received its world premiere at the Three Choirs Festival conducted by Dr Donald Hunt, Paul’s choirmaster, piano and organ tutor. The performance was truly sensational and left a huge and lasting impression, not least on these two students. It is a great privilege for Spitfire to be working with these recordings, taking up the baton to further David’s work in bringing together musical cultures from all over the world to seed the DNA of future music-making. David’s credo was “One World, One Music”.
Compositional accomplishments outside of vocal pieces included scoring more than 50 films and television productions, while Fanshawe’s field recordings have also graced the big screen, ‘starring’ in high-flying films such as Seven Years In Tibet and Gangs Of New York. Yet with his feet planted firmly on terra firma, Fanshawe’s musical explorations saw him extensively traveling throughout Africa, the Pacific, the Middle East, and the Far East with his Nagra, Uher, and Stellavox machines.
These recordings were made at a unique moment in time when the ancient world lived alongside advancing technology. Fanshawe faithfully used this technology to capture cultural traditions before technology’s inexorable onward march made the world a smaller place and cultures and traditions became more homogenized. However, describing Fanshawe’s remarkable recordings as a once-in-a-lifetime accomplishment would really be branding them with a stereotypical cliché when, in reality, they truly represent a ‘once-in-humanity-time’ accomplishment – to be forever treasured by all who hear them.
This is no proscenium presentation. Close your eyes, listen, and it’s like you’re really there as part of the truly enlightening experience, enjoying the perfect sonic ‘sweet spot’. So many of these recordings feature instruments, music, and languages ​​that have since become extinct. By being offered to the world with Spitfire Audio they are being brought back to life, sowing the seeds of inspiration for future music-makers by becoming the DNA of what we will be listening to for future generations to come.
Features
Spitfire has worked with an initial selection from the archive to present a library of carefully curated loops, phrases, one shot instruments, and vocal performances, impeccably recorded by David, which will provide instant inspiration to composers, producers, and musicians all over the world . “Listening to these extraordinarily vivid recordings is akin to looking through a window into a different time and place” -Christian Henson and Paul Thomson

CONTENT :
Selections are presented in DAVID FANSHAWE – EARTH ENCOUNTERS VOL 1 in such a way that they can be pitched up and down, played at different tempos / speeds, and more besides.
There is also a stupendous section of ‘warped’ content where the Spitfire Audio team took the original recordings and created all manner of interesting sounds from them, ranging from ethereal pads to pounding distorted beats and anything and everything in between. Such sounds are loaded into two differently-designed ‘engines’ – each geared up to differing sonic approaches and treatments.
The first provides an easy way to add ‘everyday’ effects like chorus, delay, distortion, EQ, filtering, phasing, and reverb to the original content, together with more radical sound morphing controls (within the Wobble and Yoke section). The warped content creatively benefits from Spitfire Audio’s powerful proprietary eDNA (electronic DNA) engine – as devastatingly demonstrated on the earlier EDNA01 – EARTH release, which includes individual and independent modulators; control of trim, bend, glide, cloning, tuning, and ADSR; wobbles that modulate pitch, volume, and filters; a gating and sequencer section with full control over amount, shape, speed, and length; 34 custom effects and impulse responses; and also an ability to crossfade between two selected sounds with speed and phase control capabilities additionally at hand … how adventurous can you go?
David Fanshawe: EARTH ENCOUNTERS Vol 1 will provide you with endless creative inspiration for your music-making and will bring the work of this legendary composer and explorer within the reach of musicians worldwide for the very first time.