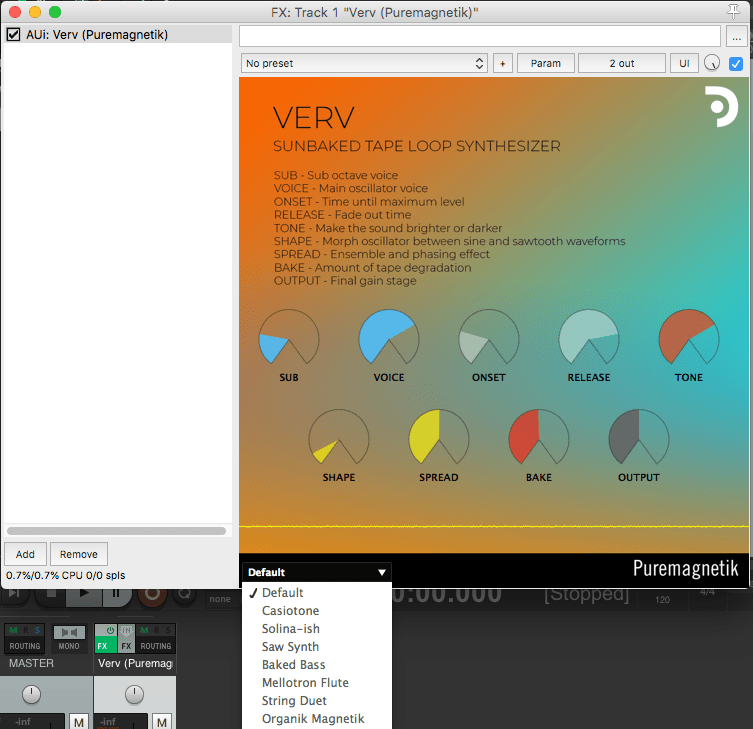 Description : Emulator of vintage string synthesizers with a baking regulator.
Synthesizer Puremagnetik Verv received the effect of a cassette film, which lay for several months under the scorching sun
Puremagnetik Studio released a new Verv loop synthesizer with a non-standard minimalistic interface. The development repeats the sound of Freeman String Symphonizer and ARP Solina string synthesizers, and can also work as a standalone bass or lead synthesizer.
In addition to emulating old stringed instruments, Verv received its own oscillator with several forms of sound wave. With it, producers will be able to add or attenuate harmonics in the sound. At the same time, a separate sub-oscillator makes it possible to use Verv as a bass synthesizer. The sub-oscillator produces sounds with a Pulse shape, but when you add the built-in function to it, Spread turns into a good lead synthesizer.
Developers especially highlight the Bake “bake” handle, which imitates the effect of a cassette film. According to the creators, when developing the aging algorithm, they tried to recreate the features of the sound of the film, which had lain for several months under the scorching sun. What you won’t do for marketing. It is hard to say how plausible the effect is, but emulation of the cassette as a whole is without any frills: clicks, hissing and other distortions associated with the film are added to the signal.
– Vintage string synthesizer emulation.
– Tape loop and wow and flutter effect
– Classic ensemble effect
– Integrates into any VST compatible host
– Includes a collection of factory presets